Stocks went lower last week, then they went higher!  After falling for much of the week we saw a surge late Friday that left the Dow Jones Industrial Average up 1.4% and the S&P 500 up 1.6% for the week. The technology heavy Nasdaq was down even after Friday's rally into the bell.  We should note that neither the Dow Jones or the S&P are quite at the highs from two weeks ago but any move higher this week would set new highs.  As investors struggled to read the choppiness this past week, we saw new coronavirus cases top 76,000 cases which is a return to higher numbers from over a month ago but the vaccine rollout is going ahead full steam.  Will the success of the vaccine be enough to stop a significant new wave and allow the economy to reopen and move foreward safely? 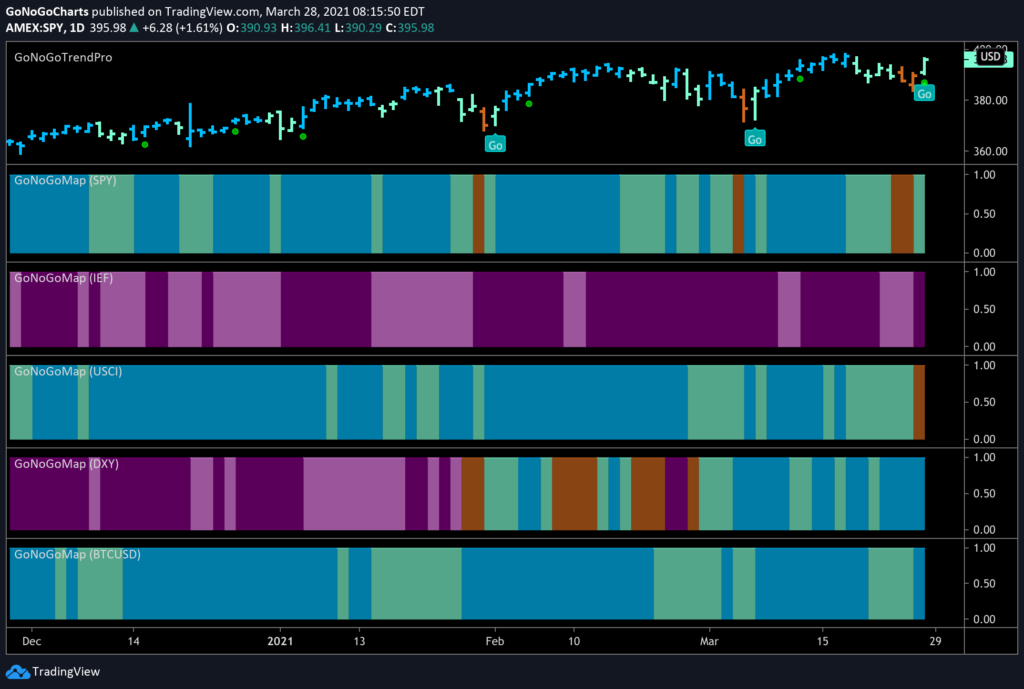 The GoNoGo Heat Map® above shows us the daily trend performance of five asset classes: Equities, Bonds, Commodities, Currencies, and Digital Assets from the US perspective. The takeaway remains the same as it has been for several weeks.  Equities, commodities, and the cryptocurrency markets are now in established “Go” trends.

Panel 1 – Stocks continue to paint “Go” bars as the trend persists, but only after dipping into Go Fish territory this week. SPDR® S&P 500® ETF Trust seeks to provide investment results that, before expenses, correspond generally to the price and yield performance of the S&P.

Panel 2 – Government bonds, continue to paint “NoGo” bars, as the downtrend remains strong. $IEF tracks a market-value-weighted index of debt issued by the US Treasury with 7-10 years to maturity remaining.

Panel 3 – Commodities painted a "Go Fish" bar to end the week, the first such bar in some time.  $USCI tracks an equal-weighted index of 14 commodity futures contracts and holds at least one precious metal, industrial metal, energy, livestock, soft, and grain commodity.

Panel 4 - The US Dollar is now in an established “Go” trend and has strengthened this week.  $DXY is an index of the value of the United States Dollar relative to a basket of foreign currencies.

The GoNoGo RelMap® below shows the trend performance of each sector relative to the index. 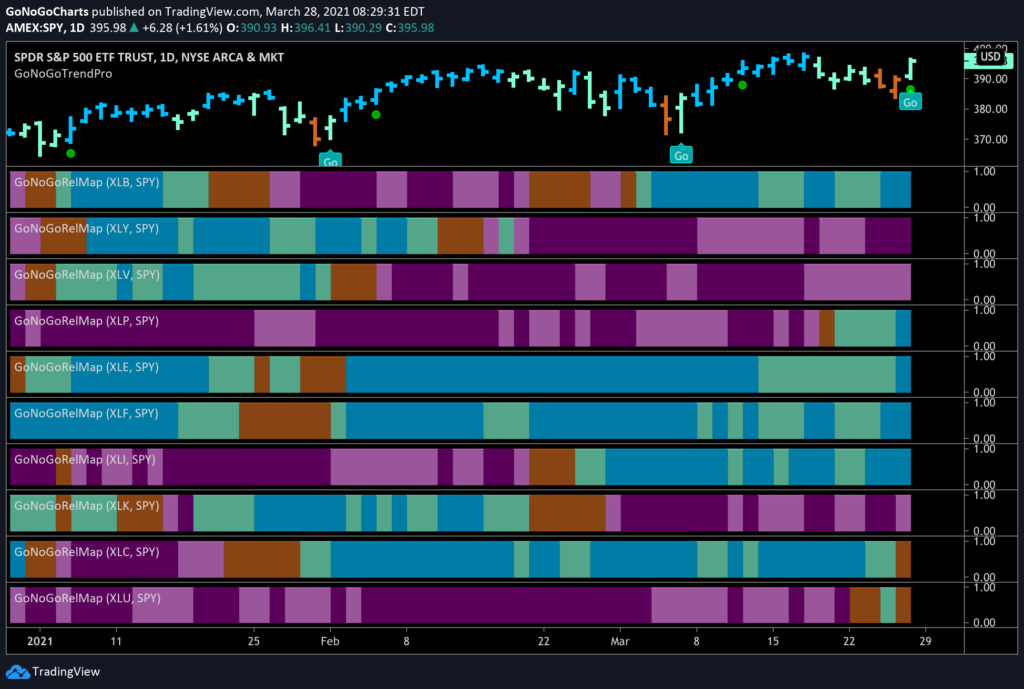 TECHNOLOGY CAN BE TRYING

The daily chart below shows the $QQQ, the Invesco fund that tracks the performance of the Nasdaq 100.  We mentioned above that Technology is underperforming, and as we have discussed the rotation away from growth stocks, particularly mega cap technology, let's look at the GoNoGo Chart to assess the technical environment. 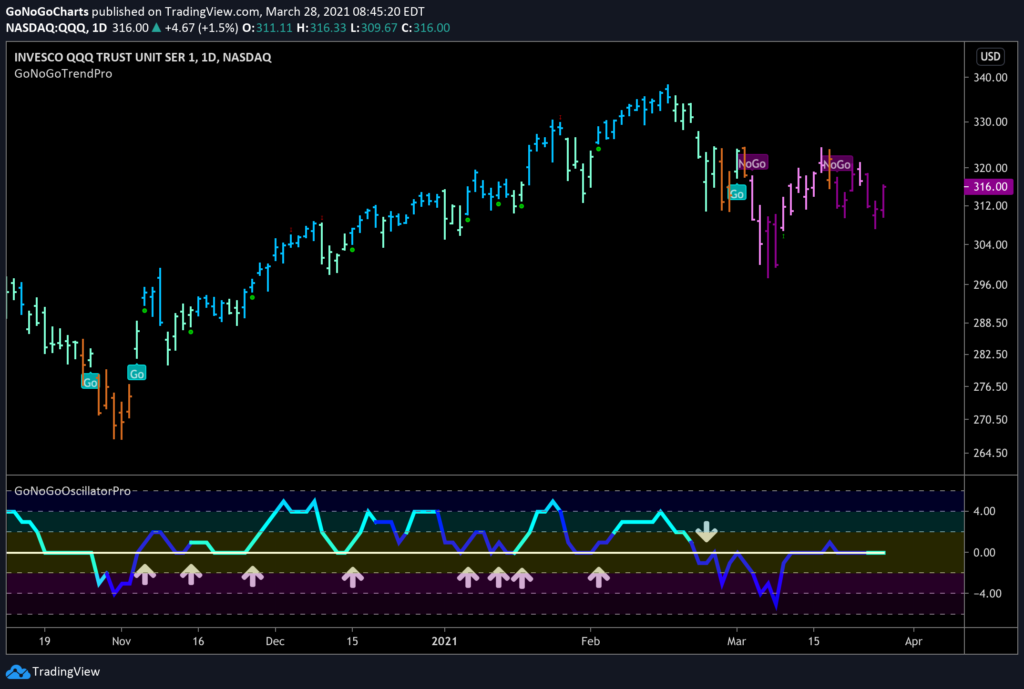 If technology is showing signs of potential struggle, let's take a look at one of the absolute giants.  The GoNoGo chart below shows daily prices for $TSLA.  Will the automaker continue to fall from here? 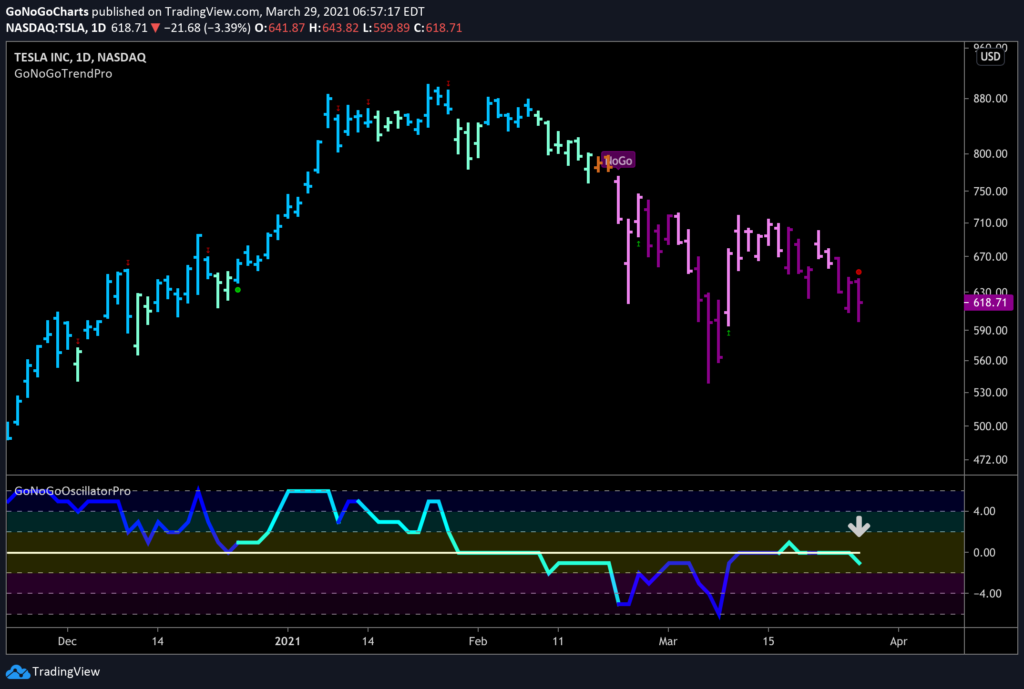 We saw on the GoNoGo RelMap earlier that the staples sector was starting to outperform the base index.  Below is a GoNoGo chart of the relative strength ratio of $XLP/SPY showing that relationship. 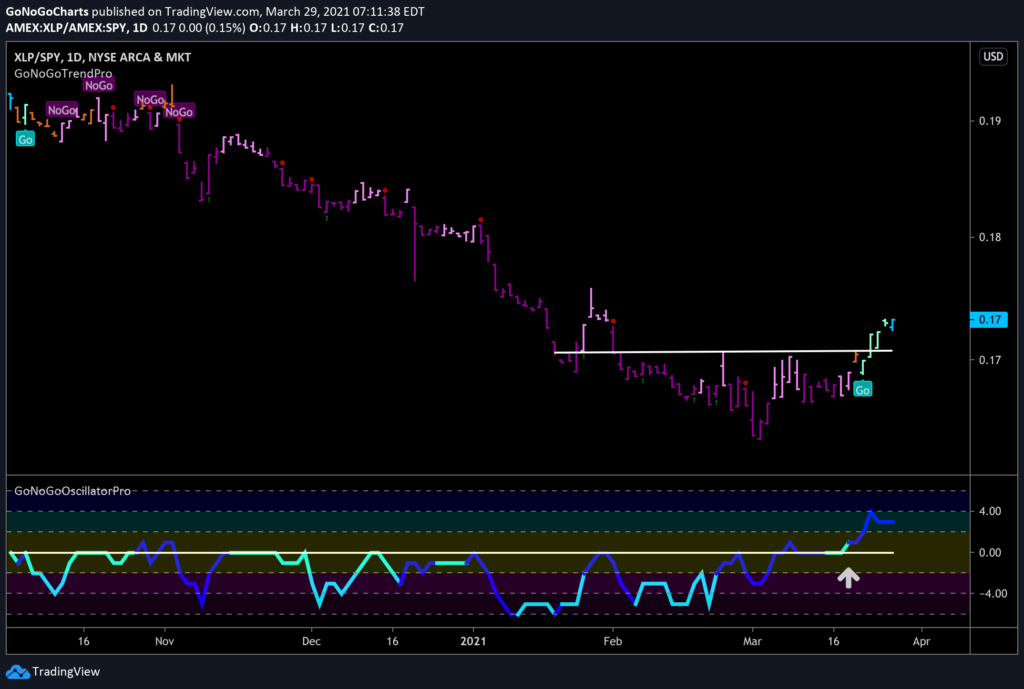 Having looked at the ratio of Staples to the S&P500, the GoNoGo chart below shows the pure GoNoGo chart of daily prices for the consumer staples sector ETF $XLP. 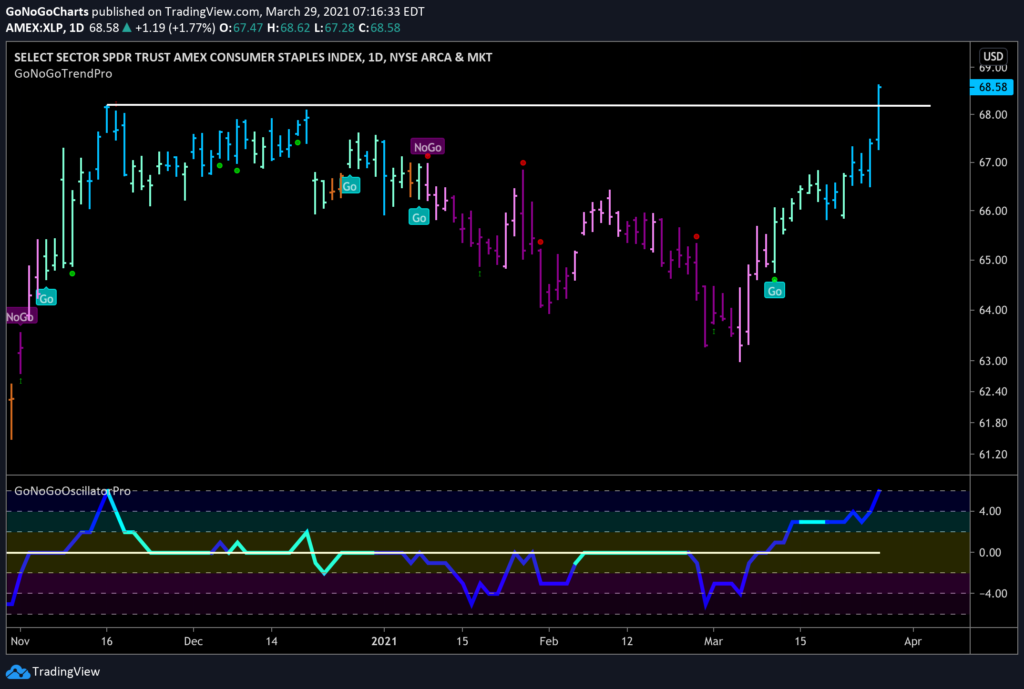 As the Consumer Staples sector shows strength, let's turn to an individual company within that sector to try to capture alpha.  Kraft Heinz is a familiar name and we'll look to see how well positioned the food producer and distributor is for further gains.  The GoNoGo chart below shows weekly prices. 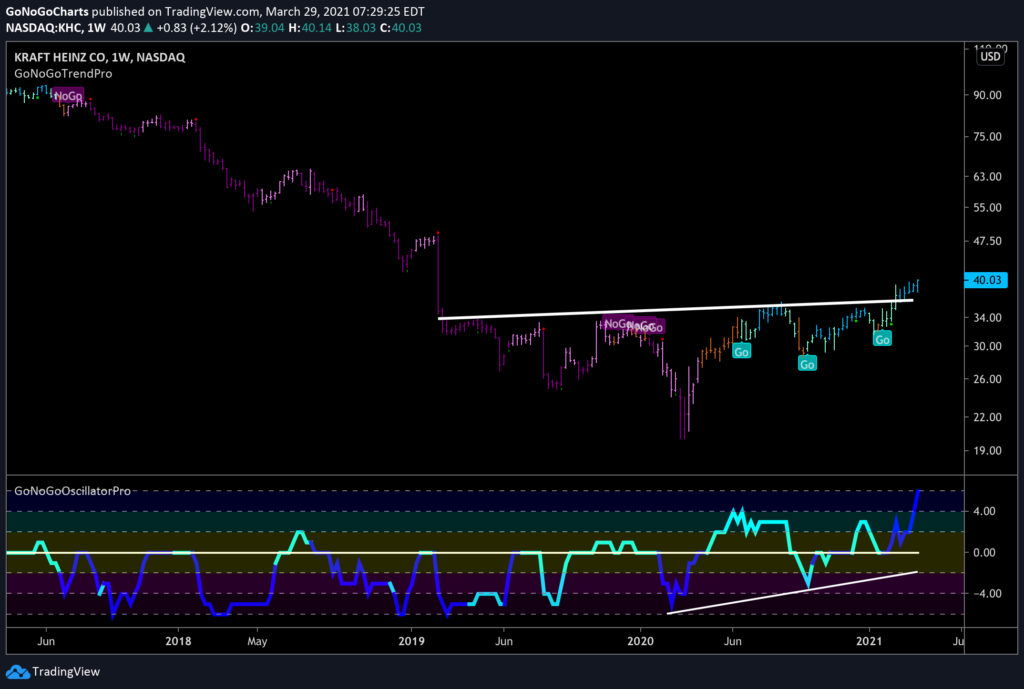 Given that we see strong probability that there is a long term Go trend that is in place from the weekly GoNoGo chart, let's dive into the daily chart to see if there is an opportunity to enter the trend. 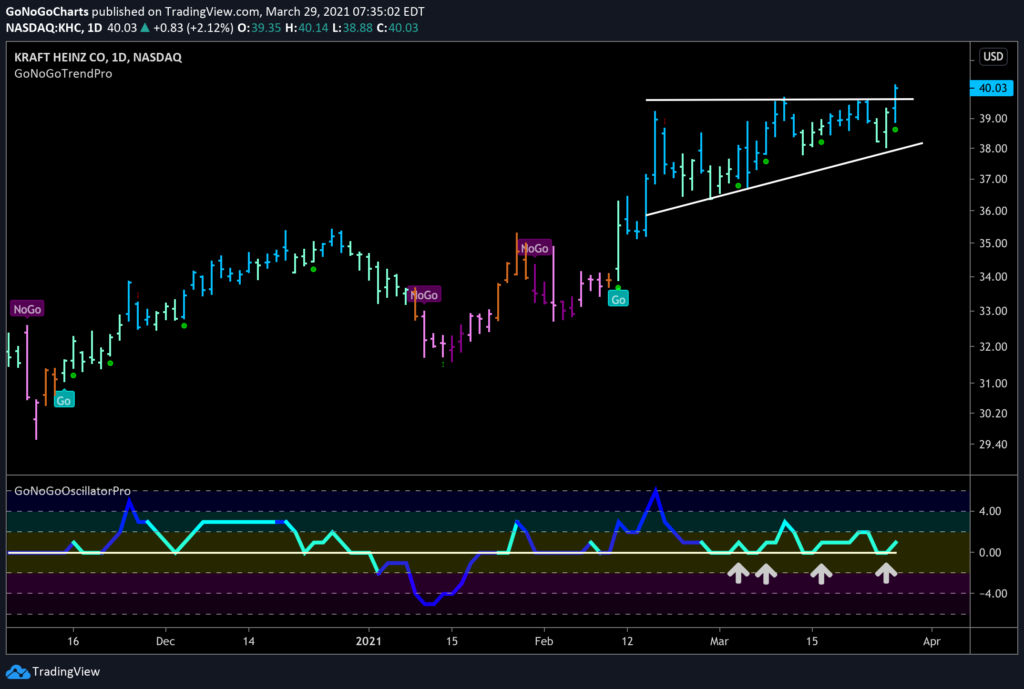