With lumber, copper, and other industrial commodities cooling or correcting last week, the fervor we are hearing about inflation risk and higher yields in US Treasuries may be overplayed. Markets are a leading indicator of the economy, not the other way around. There is a lag between the move and the story. It is often only in hindsight that we find out "why" something happened.

By the time investors new why Enron shares were in freefall, the shares were already worthless. Walter Deemer told me “watch their feet, not their mouths.” And, it seems the Go trends in commodities have all made an incredible run – ahead of the cascade of inflation talk, ahead of the CPI numbers last week, and ahead of the hype.

At the same time that everyone has joined the hunt for inflation, both the US Treasuries and commodities have failed to confirm. Whether it will capsize or not, perhaps this is a signal that the crowd has all shifted to the same side of the boat?

While it is difficult to drown out the noise of the crowd - in fact, we’ve evolved cognitive biases to make sure we stick with the herd –investing should be much more mechanical and much less emotional.  This week, even though it hurts, we’ll need to consider that themes are shifting again, potentially in contradiction to what we’ve been hearing through the weekend…

The Risk Off Week, within a Risk-On Market

Take a look at the GoNoGo Heat Map below which offers a quick comparison of the major asset classes' trends. You can see we're still in a risk-on market generally speaking as equities and commodities are in Go trends while cash and bonds are generally in "NoGo" trends . However, take a look at the 2nd panel. Bond Prices (inverse to yields) popped out of their NoGo and closed last week on an amber bar. If the inflation story were true, we'd see yields soaring and bond prices dropping. That is not the picture below... 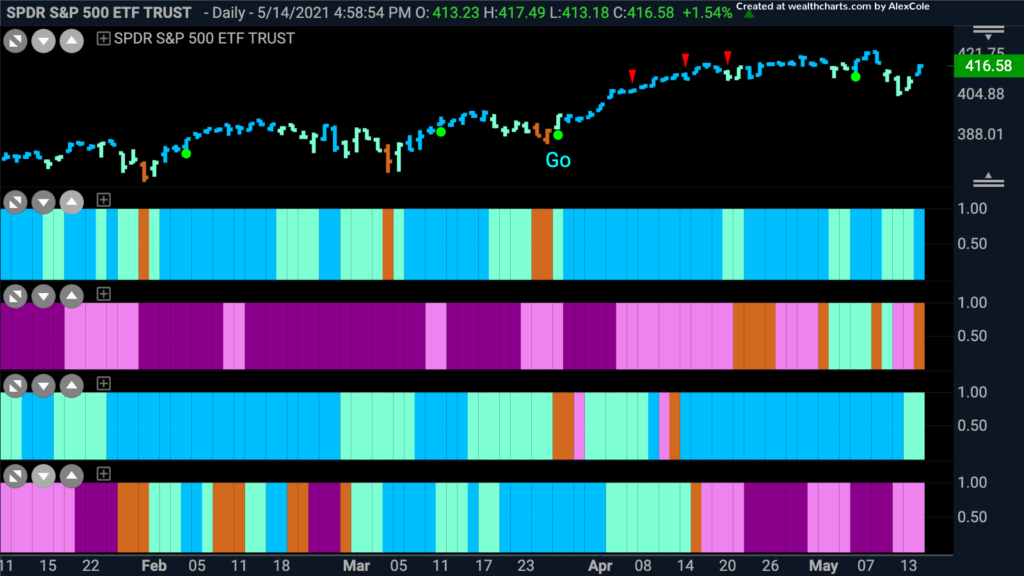 Cyclical Sectors... and even some Defensive

For months GoNoGo Research has been harping on the rotation into cyclical sectors. What may seem obvious in the charts is often difficult for many investors to accept. "My FAANG stocks delivered such great return in 2020,  I can't just abandon them?" "But I've put so much money in the ARKK ETF, how can it be losing so much?" Unfortunately, the market doesn't really care what position we took last week, last month, or last year. We need to listen to where it is headed.

The GoNoGo RelMap below shows leaders and laggards relative to the broad S&P Index. Consistent with the thematic trends of reopening the economy and inflation defensive sectors, we continue to see leadership from $XLB materials, $XLE energy, $XLF financials, $XLI industrials, but notice how $XLV healthcare and $XLP consumer staples have joined the party. Even $XLU utilities are painting mostly neutral amber bands.

The sectors which pulled the broad index lower last week, are those in pink and purple below. Namely, the consumer discretionary $XLY, information technology $XLK, and communications $XLC. These three sectors represent the large-cap growth names that were the darlings of 2020's rally off the March lows.

It's summer in the Northern Hemisphere, time to get your shorts on! The chart below shows the SPDR ETF of the consumer discretionary sector, $XLY.  As mentioned above this sector helped drive markets lower this week.  Let's take a look at the daily GoNoGo Chart to see the price action behind the "NoGo" trend. 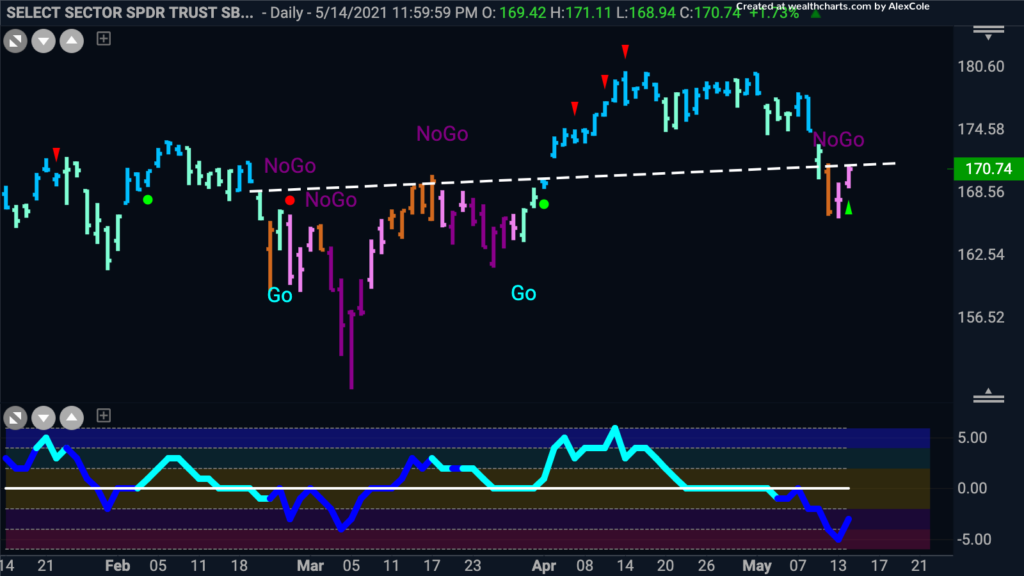 In February 2009, Bank of America shares hit an all-time low of $2.53. Investors have been anchored to the pain of loss since the great financial crisis, and the pace of recovery has been glacial. In fact, the "Go" trend pictured below is the entire picture of the $XLF trading above the 2007 highs. 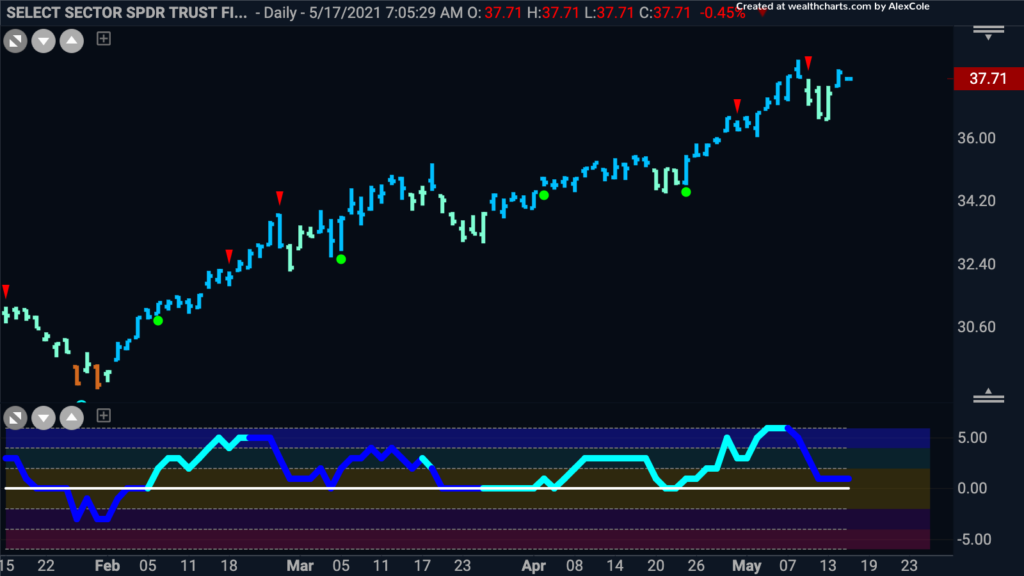 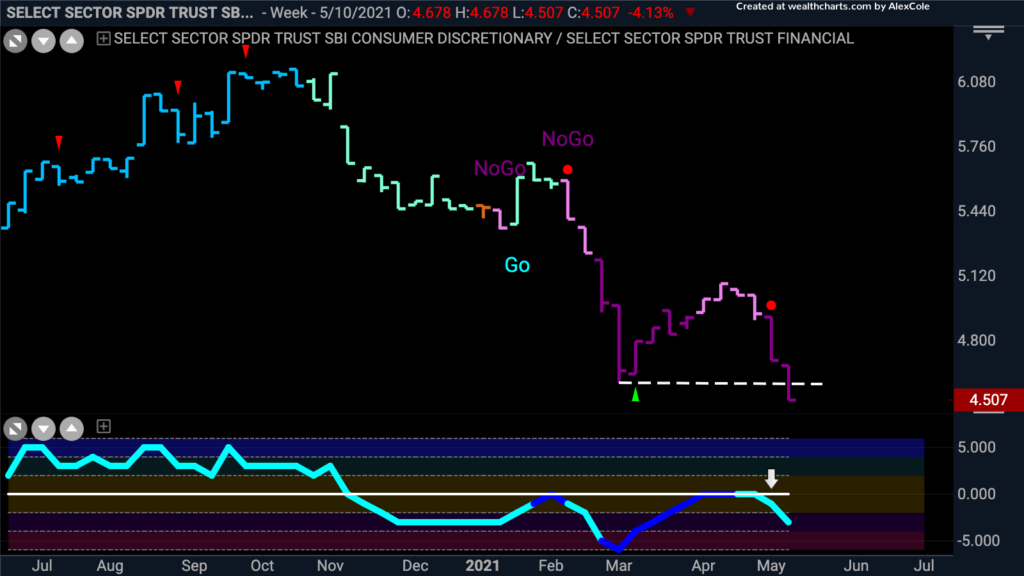 With the financials sector in a strong "Go" trend and outperforming the benchmark on a relative basis, let's take a look again at Bank of America to see just how far we've come since the GFC. 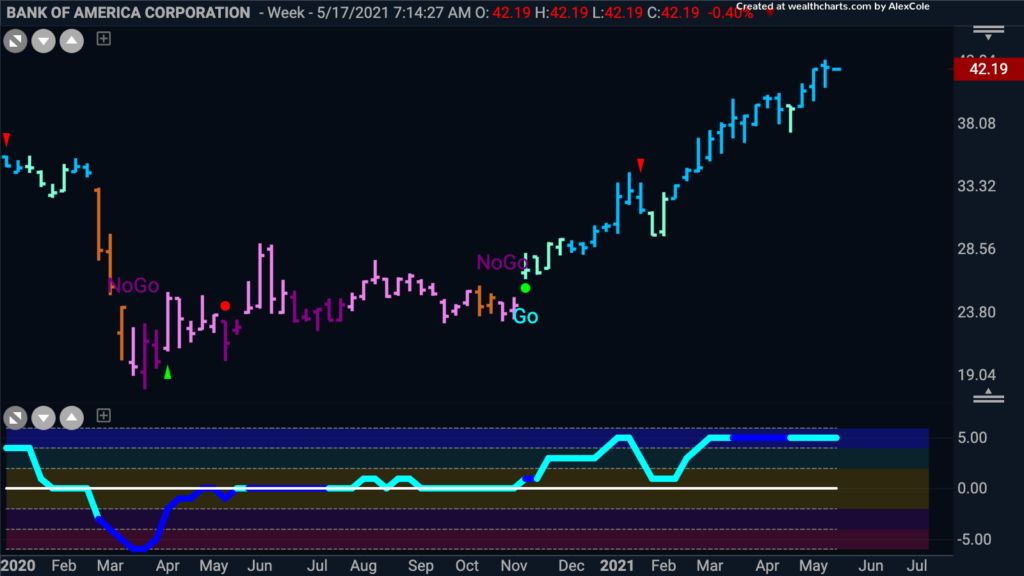 Drilling down into a daily GoNoGo Chart we see trend conditions are still favorable. 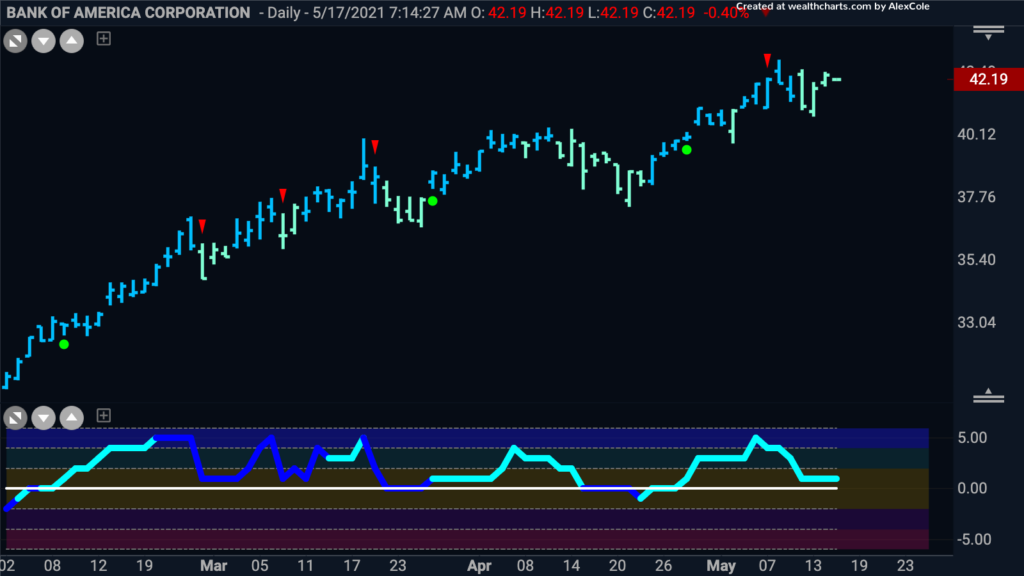 If we wanted to take a long position in Bank of America based on the longer-term trends that we see in place we can go to a lower time frame to assess potential entry.  The chart below is a GoNoGo chart using 4hr prices. 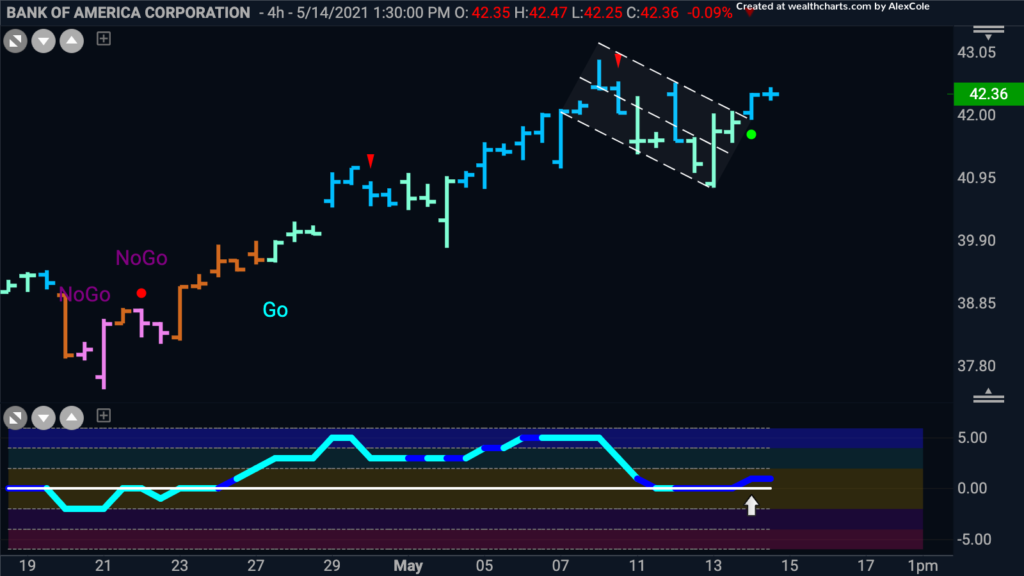 The weekly GoNoGo Chart below of $ETSY, an e-commerce company that is a fast-growing consumer discretionary stock, depicts a great run-up in price over the past year.  Can this continue? 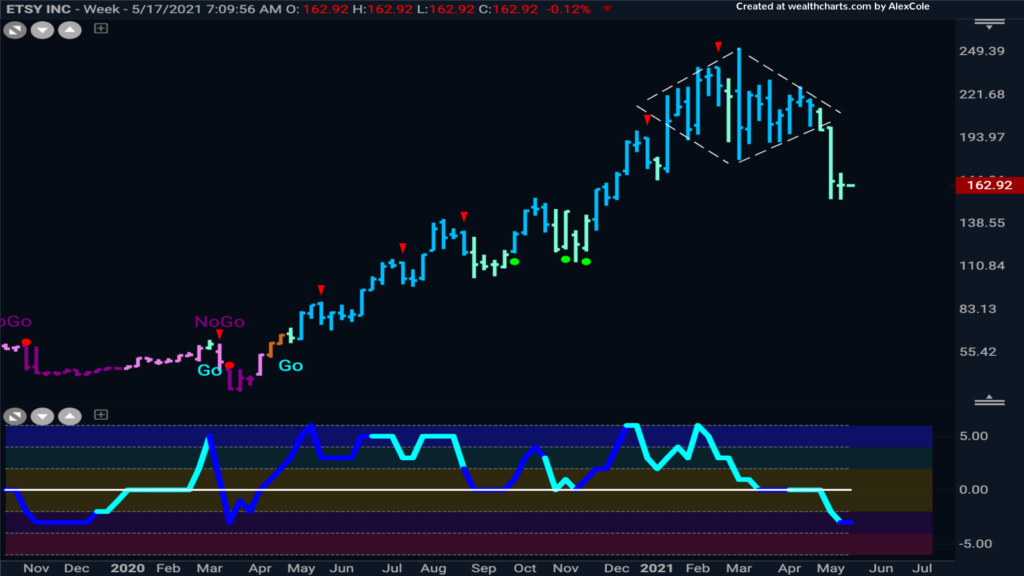 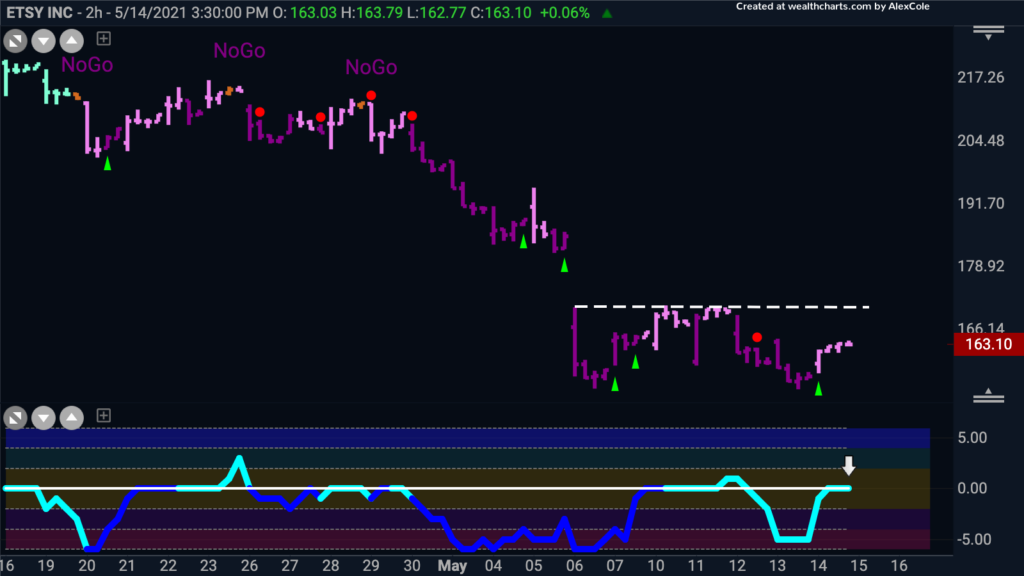 Defense is warming up, if not already on the field

It's been a choppy year, the S&P has ground higher despite numerous challenges. Combining the price action we have seen recently, with the emergence of defensive sectors on a relative basis, and the seasonal headwinds that historically sandbag market performance over the summer months, perhaps we can look at long opportunities in defensive areas.

Many analysts have been talking about the Gold trade as an opportunity to defend against inflation risk, or the potential move by investors toward a safe-haven store of value. Across the board, precious metals such as  Gold, Silver and Platinum are entering or re-entering "Go" trends. If gold is catching a bid after months of underperformance, then gold miners are the equities to help capture that trend. See the chart below of Newmont Corporation $NEM that just posted its highest weekly close since 1987 with an extremely overbought reading on GoNoGo Oscillator. Bullish or bearish?