Good morning and welcome to this week's Flight Path.  Let's take a look at the below GoNoGo Asset Map for this week.  The top panel shows that the trend in U.S. equities has remained a "NoGo" albeit painting paler pink bars this week. Volatility has continued as the world deals with continued unrest. Treasury bond prices remain in a strong "NoGo" painting purple bars.  Commodities remain the leading light for trend followers as the "Go" trend remains in full force as oil prices continue to soar.  The dollar shows further strength this week and we saw Bitcoin roll over, unable to hold the "Go" trend from last week. 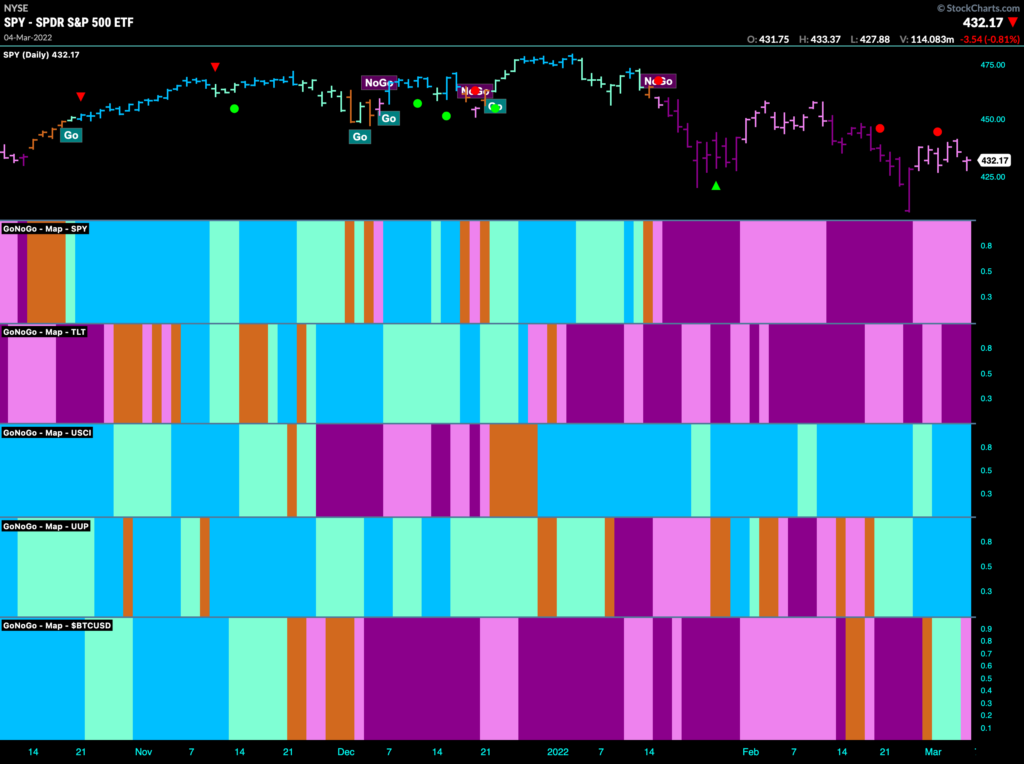 Below is the chart of the $SPY with GoNoGo Trend and GoNoGo Oscillator and Squeeze applied.  The trend is a "NoGo" and price looks to have set a new lower high after the NoGo Trend Continuation icon we saw last week.  Currently, the GoNoGo Oscillator is at the zero line where we will watch to see if it gets rejected again.  This would be to be expected if the NoGo Trend is strong enough to continue.  If the zero line holds as resistance we will see another NoGo Trend continuation icon indicating that momentum has returned in the direction of the "NoGo".  We could then expect price to move lower, perhaps testing the low from February 24th. 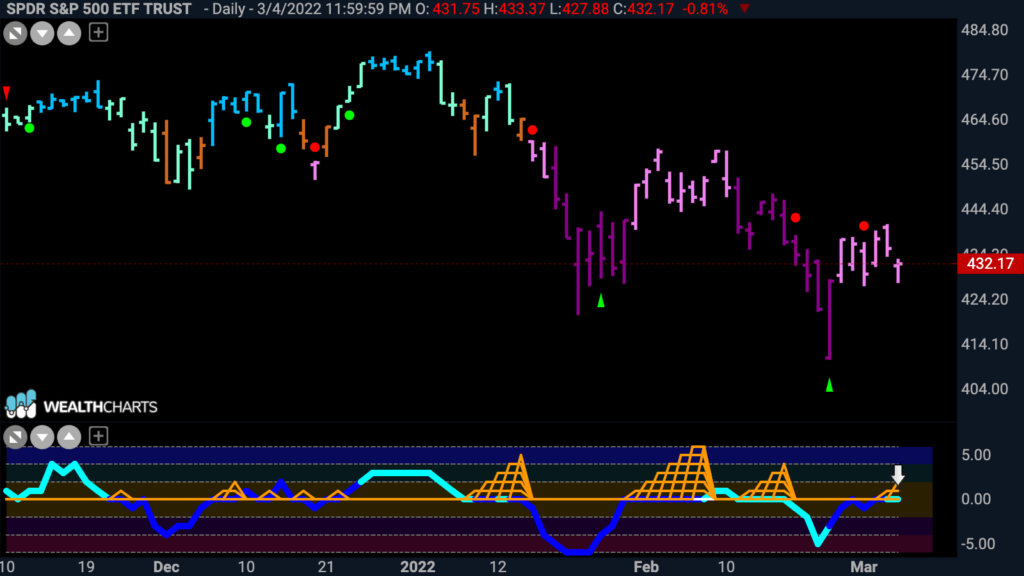 Below is a GoNoGo Sector RelMap.  The chart applies the GoNoGo Trend to the relative ratio of each sector ETF to the base ETF, the $SPY.  There are five sectors that are showing relative "Go" trends to end the week.  Energy ($XLE) industrials ($XLI), healthcare ($XLV), staples ($XLP) and utilities ($XLU) are painting "Go" bars.    The defensive sectors therefore continue to outperform on a relative basis which is a sign of continued trouble for the markets.  Technology ($XLK), discretionary ($XLY) and communications ($XLC) continue to drag the index lower as they ended the week lower.  Financials ($XLF) fell into a strong relative "NoGo" this week uncertainty surrounds global banking systems. 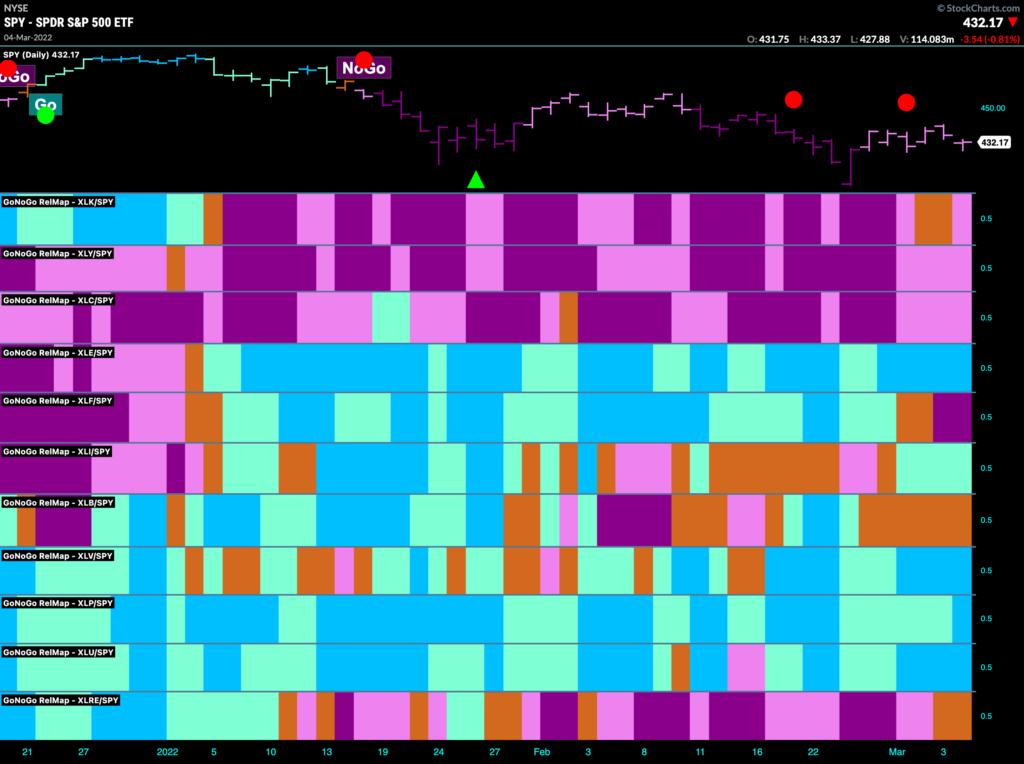 As the market continues to endure turmoil, the energy sector has been a provider of alpha for many investors.  Last week saw another strong rise in prices as we saw uninterrupted blue "Go" bars as price set higher highs daily.  GoNoGo Oscillator rallied strongly off the zero line out of a GoNoGo Squeeze and on heavy volume.  While the GoNoGo Oscillator is overbought currently, this is as bullish of a chart as it gets.   We can look at any pull backs as possible buying opportunities. 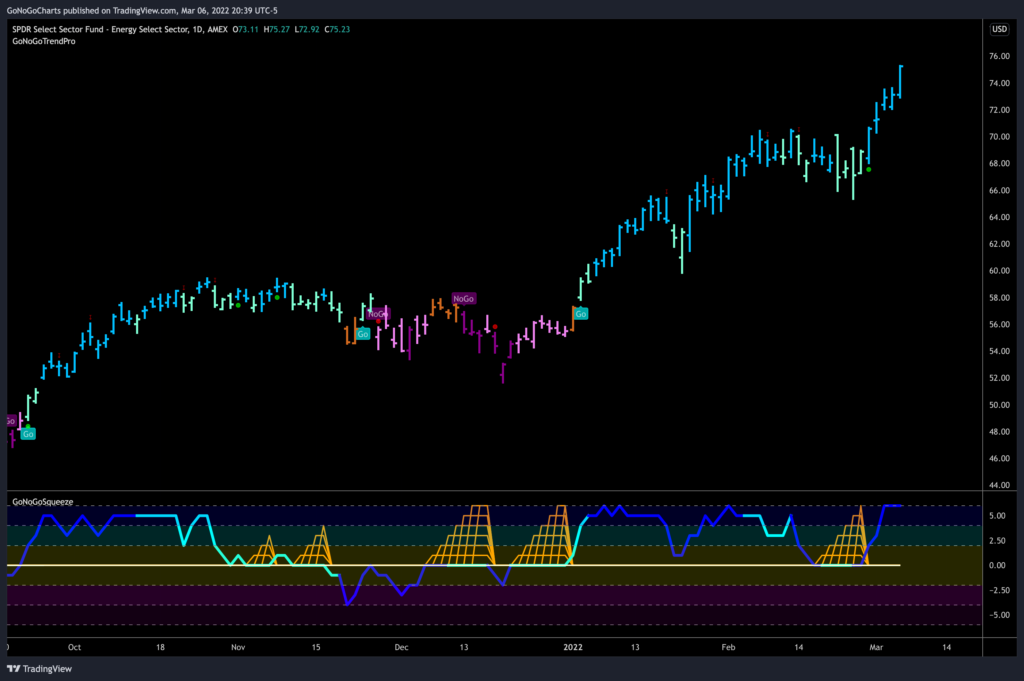 Of course, oil has been a primary driver in the strength of the energy sector and commodities in general. This week saw a rapid rise as tensions escalated in the Russia/Ukraine crisis.  After the sideways price action in February many wondered if the price of oil was overextended, but we saw a fresh Go Trend Continuation green circle as GoNoGo Oscillator rallied sharply off the zero line on heavy volume.  That consolidation proved to be a pause only in the "Go" trend. 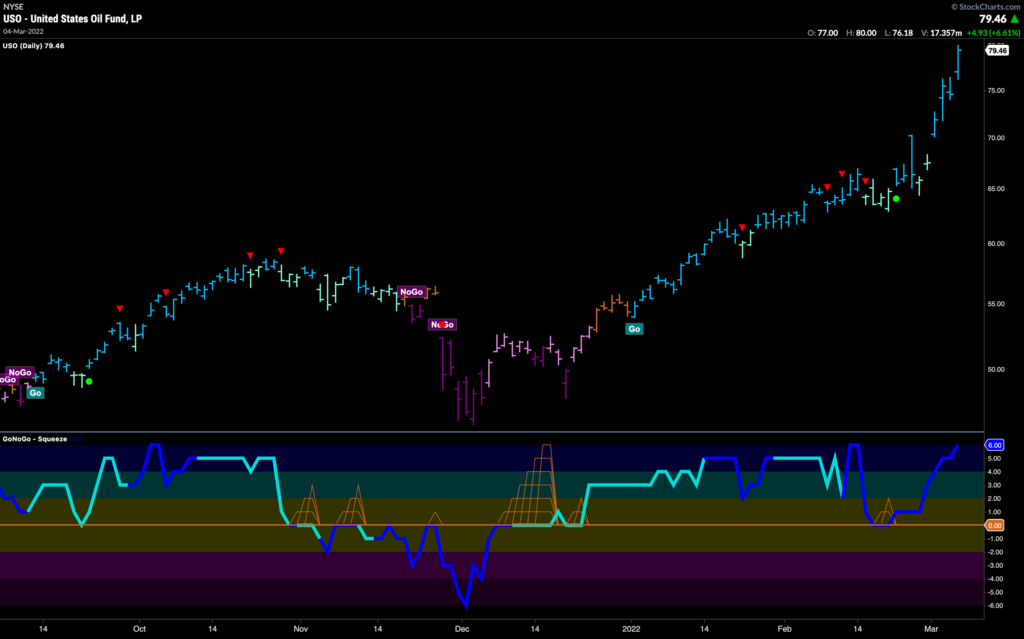 The daily chart of $USO above shows that price is overbought and at new highs.  Is it too late to participate in this powerful trend.  Are we resigned to sitting on the sidelines.  We could spend the next few weeks watching the daily chart for a Go Trend Continuation icon or a pull back large enough to give us an opportunity to enter but it may never come. This is a situation where we can turn to multi time frame analysis.  We can step down timeframes to find sensible entry points while on the daily chart price continues to run higher.  The below chart is a 30 minute chart with GoNoGo Trend, Oscillator and Squeeze to illustrate the point.   Price really took off after it gapped higher on March 1st and on the daily chart never looked back.  Below we can see that when we go to a smaller time frame we get several opportunities to take part in the move. There are Go Trend Continuation Icons (green circles) every day from the 1st to the 4th on small pullbacks that weren't visible on the daily chart.  This is the beauty of the fractal nature of technical analysis. 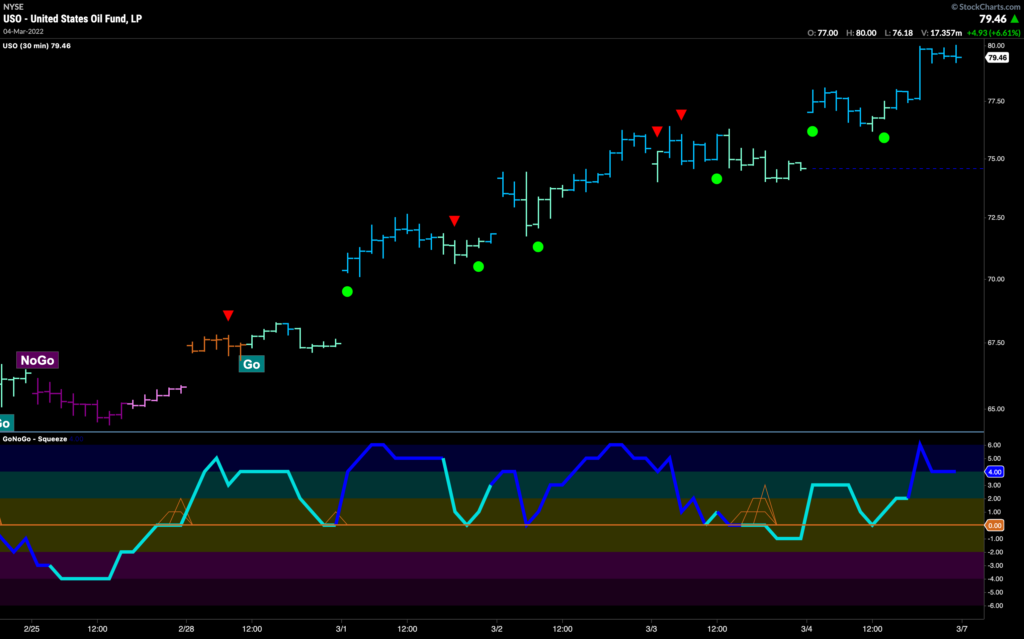 As oil continues to move higher, on a single security basis is there an opportunity to find?  The chart below shows the GoNoGo Trend, Oscillator and Squeeze applied to daily prices of $VLO.  We can see that while oil was racing higher, Valero saw a significant correction that culminated in an amber "Go Fish" bar with GoNoGo Oscillator well into negative territory.  Price has rallied since, returning to "Go" bars and the oscillator has risen to test the zero line.  We will look at the oscillator here, and if it can break back into positive territory we will see a Go Trend Continuation green circle under price, indicating that momentum is back on the side of the trend. 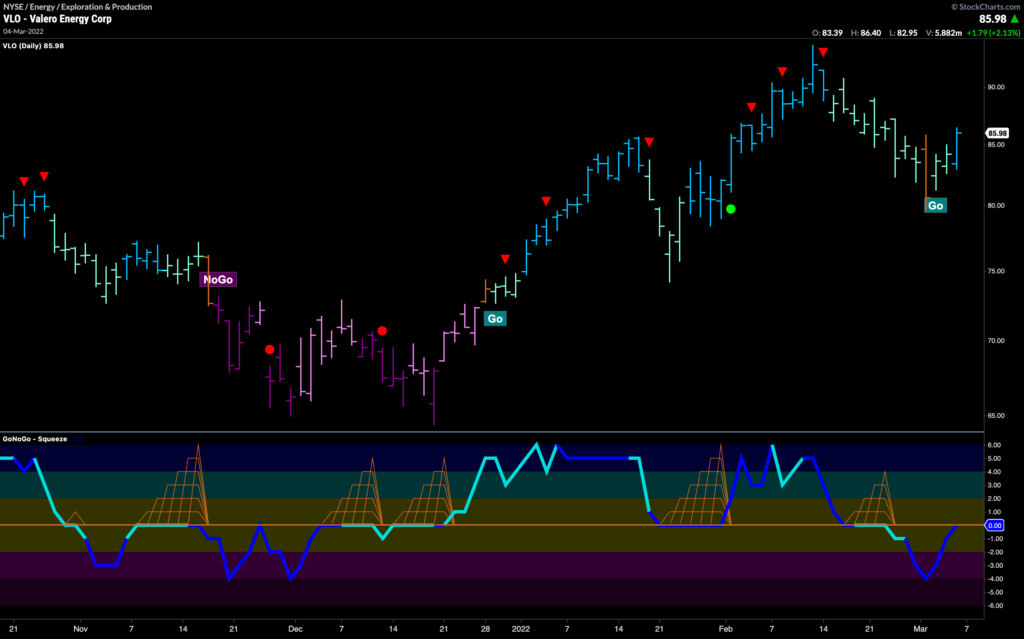 If we are looking to aggressively play the above scenario, we can turn to a smaller time frame, in this example a 60 minute chart.  If our take is that strong oil will lift $VLO then the 60 minute chart shows a new "Go" trend that began on Friday.  The "NoGo" through the second half of February and into the beginning of March would have kept us away from the strong correction that we saw on the daily chart.  The hourly trend is now a strong "Go' and we can potentially look for pullbacks on a smaller time frame such as this to get early exposure to a prolonged rally in Valero Energy should it come. 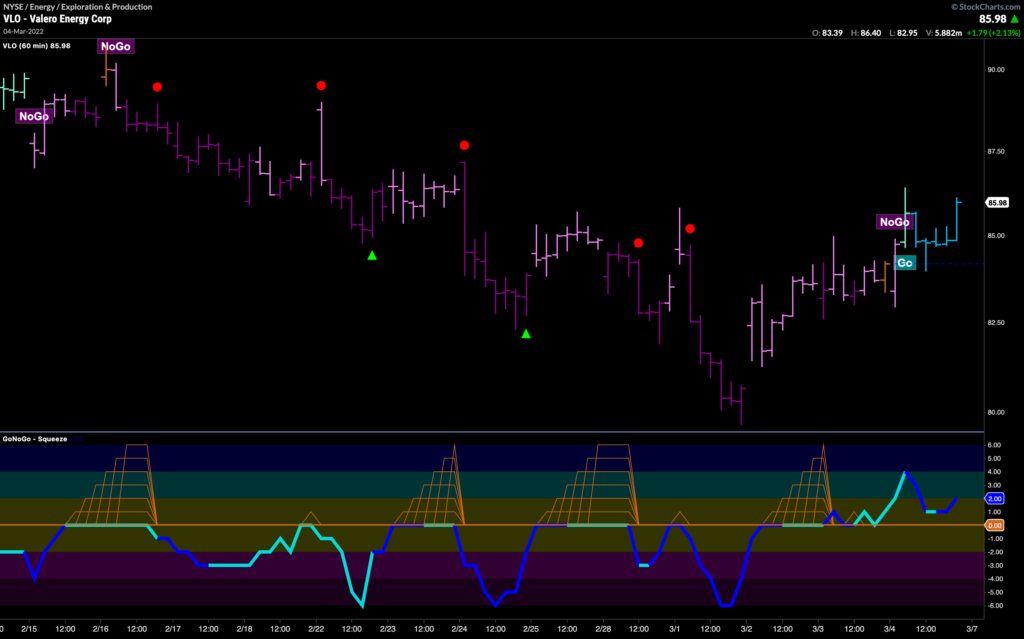 Is $LULU a Lemon?

With the discretionary sector continuing to struggle let's take a look at Lululemon.  While there is no "Lemon law" that we can turn to when investing in stocks that continue to tumble, we can use the weight of the evidence to help us steer clear of securities that are more trouble than they are worth, or better yet, participate in a profitable move to the downside.  Is this such an opportunity?  The GoNoGo Chart below shows daily prices for the leisurewear company, and we can see immediately that we are at an inflection point.  After a few months of a "NoGo" that saw $LULU trading near $282, prices have risen last week and ended the weak painting amber "Go Fish" bars.  GoNoGo Oscillator has also risen to test the zero line from below and is now riding the zero line as volatility shrinks.  If price is to return to the "NoGo" trend, we will likely see the oscillator get rejected at this level.  If it does, we can expect price to move lower after setting a new lower high as it has throughout the last few months. 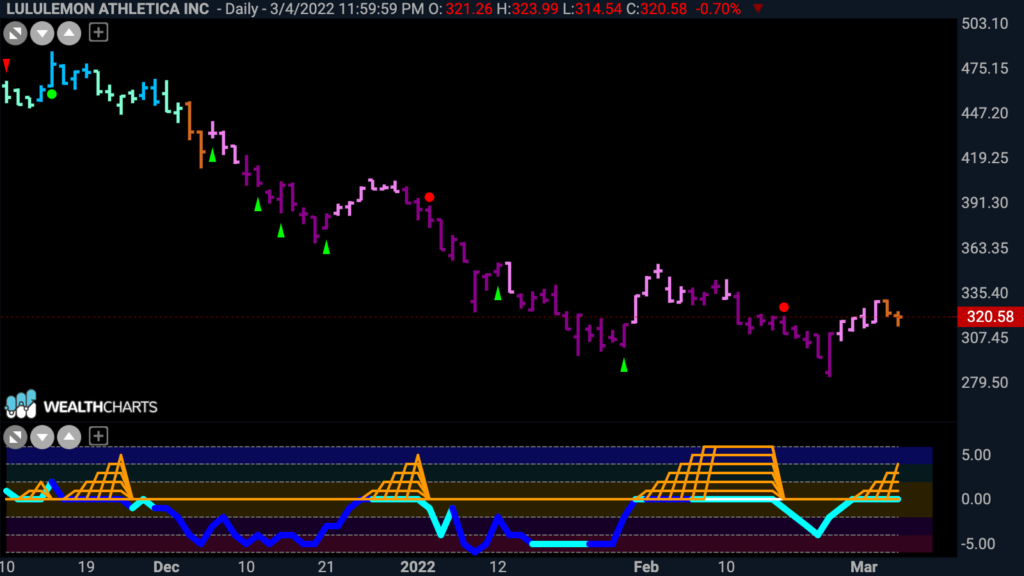 On the lookout for an entry into the possible return to a "NoGo" on the daily chart, we step down again to a smaller time frame.  The GoNoGo Chart below shows 30 minute price bars and we can see that the "NoGo" has emerged again here.  After GoNoGo Oscillator broke below the zero line on March 3rd, price struggled to hold "Go" colors and we saw amber "Go Fish" bars and then "NoGo" pinks and purples.  On this shorter timeframe GoNoGo Oscillator is riding the zero line as well, causing the climbing grid of GoNoGo Squeeze to reach its extreme.  We will look to see if the oscillator breaks out of the squeeze into negative territory, which would indicate a resurgence of the "NoGo" trend as momentum returns.  If the Oscillator does indeed move lower, we will see a NoGo Trend Continuation Icon (red circle) above the price bar, offering a relatively low risk opportunity to participate in any move lower. 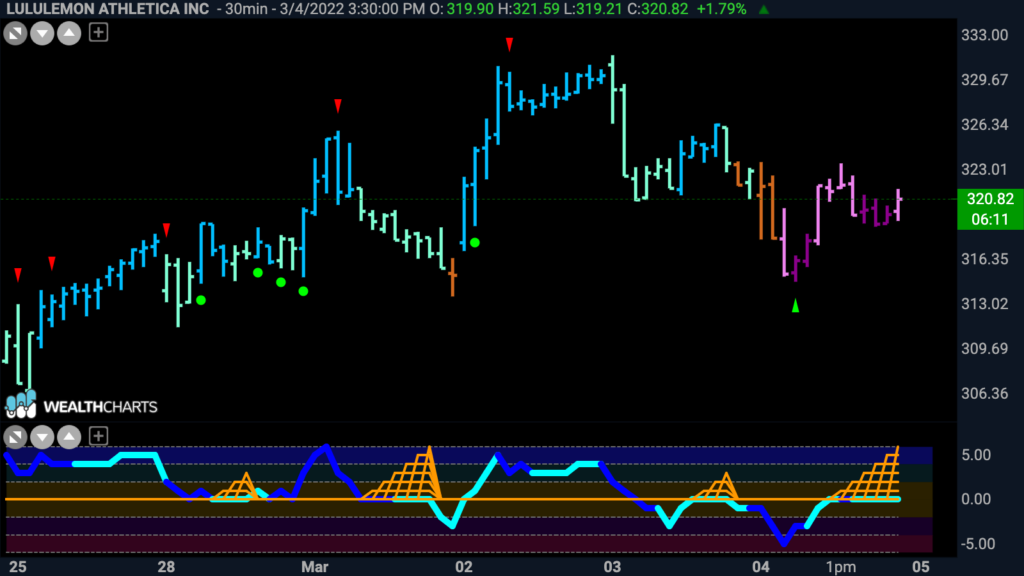