On the doorstep of runaway inflation just when we were told yields would spike, the 10-yr yield fell ten basis points this week to 1.46%. The market is full of surprises and this sharp decrease in longer-term bond yields favors growth stocks by reducing the implied discount on future earnings while weighing on financials by threatening bank lending margins. 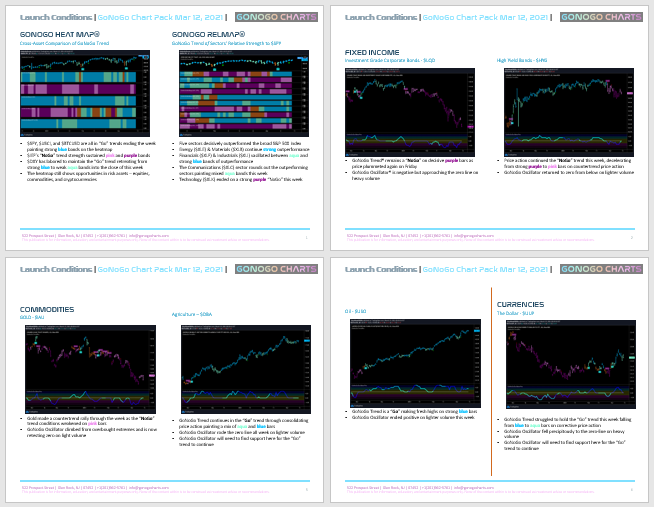 Interest rates and inflation continued to dominate sentiment, but the falling yields appeared to help push the S&P 500 Index to a record high in a week of relatively light summer trading. While the S&P 500 narrowly missed out on an all-time closing high in each of the first 3 sessions this week, it finally got over the hump on Thursday and ended the week with a 0.4% gain. Price action was bound by a relatively tight range. 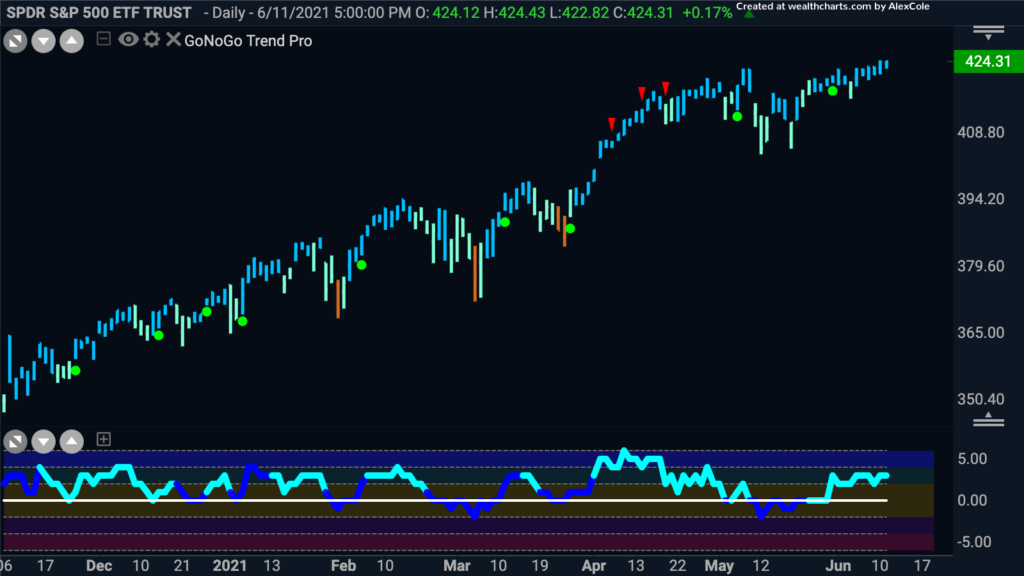 From a sector perspective, the S&P 500 health care (+1.9%), information technology (+1.4%), and consumer discretionary (+1.6%) sectors finished the week as leaders. Notably, a 4% gain in Amazon.com ($AMZN) propped up the consumer discretionary sector. And, Health care stocks led the index thanks to Biogen, $BIIB. The drugmaker’s shares rose sharply (up 39% for the week!) after the FDA granted broad authorization to its new Alzheimer’s disease treatment, Aduhelm.

Pulling up the rear, our laggards for the week featured all the recent favorites. Cyclical sectors declined around 2.0% including: financials (-2.4%), materials (-2.0%), and industrials (-1.7%). See the GoNoGo RelMap below showing the trends for the relative ratios of each sector against the benchmark S&P 500 index: 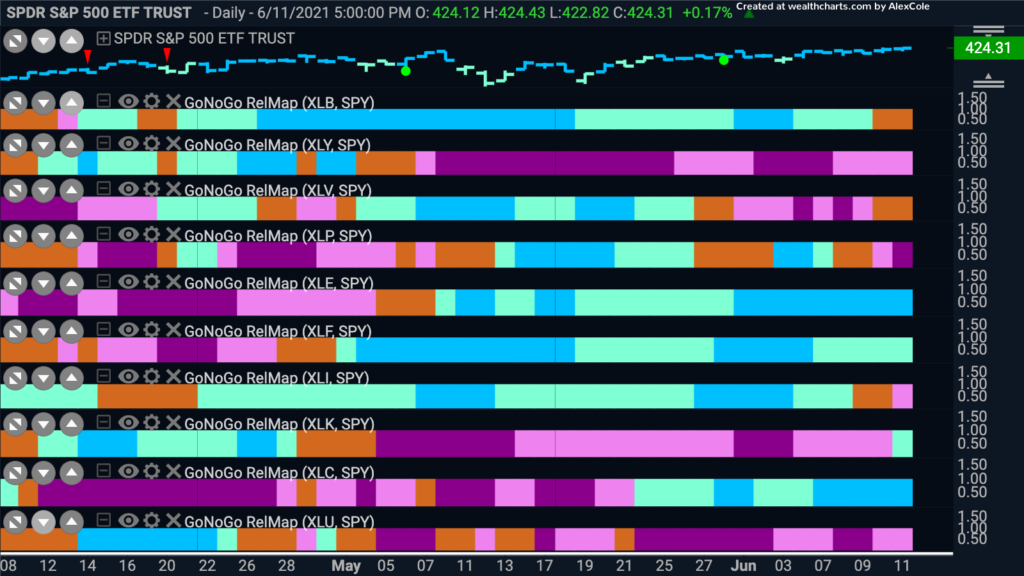 The underperformance of the cyclical stocks was partially due to profit-taking interest and an underlying belief that the economy is running into peak growth rates. Treasury yields decreased throughout the week, seemingly pushed lower by continued assurances from Federal Reserve policymakers that they would keep monetary policy highly accommodative for “some time” and that the recent spike in inflation would prove temporary. Falling yields in the Treasury market, appear to be sticking with the peak inflation thesis.

Even the Investment Grade Corporate Bond ETF $LQD delivered a solid five day rally this week (remember, prices move inverse to yields on bonds). See the Daily GoNoGo Trend Below and in your ChartPack. 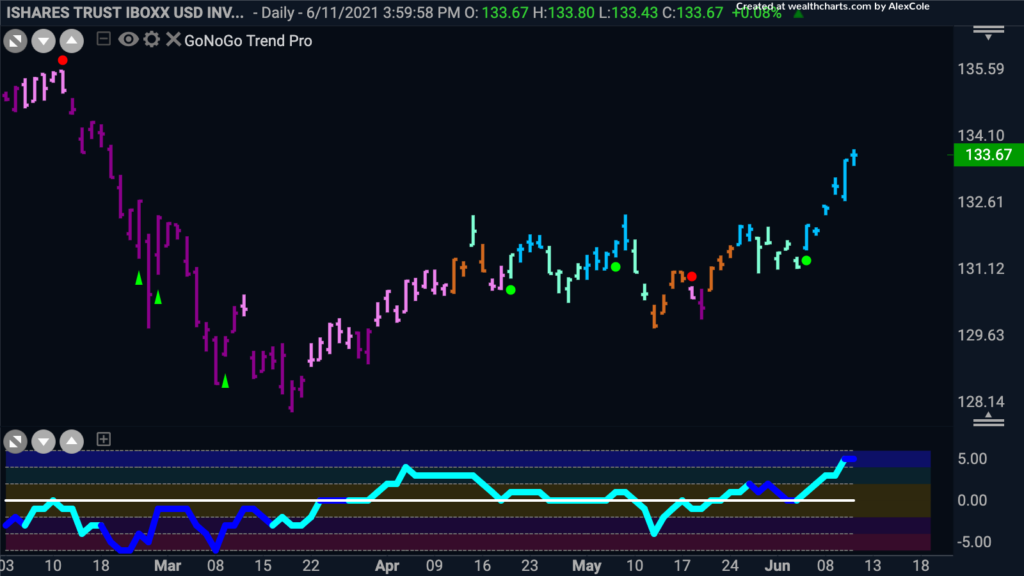 All measures of inflation are rising. CPI rose 5.0% from a year ago, and the core index rose 3.8%. Data skewed by Covid collapse is not the only driver. Core index prices rose 0.7% in May from April, more than three times the average monthly increase. The impact of supply shortages and bottlenecks in the supply-chain may be temporary drivers as consumer demand returns for leisure and entertainment.

Long-term rates are now back below the pre-pandemic 2019 lows and well below market-based inflation expectations for the next 10 years. Last time the gap between inflation expectations and yields was so large was back in 2013 right before the so-called "taper tantrum." Many analysts believe that labor statistics are the central ballast keeping the Fed accommodative and yields low.

“On June 4, the U.S. Bureau of Labor Statistics reported that the nation added 559,000 jobs during the month of May. In almost any other time, the May report would have been viewed as wildly positive, but not in the era of COVID-19, where over 7 million American jobs lost during the early months of the pandemic have yet to return.” - Chief Investment Strategist Erik Ristuben, Russell Investments

Labor shortages may drive less-transitory wage inflation. As employment gains pick up, bond yields could resume their upward trend, and quite possibly with an emphasis on long-bonds producing a steepening yield-curve.

The shorter-term horizon favors following the GoNoGo Charts to positions in growth stocks that are trending and outperforming.